Hilary and Zac Cheney are delighted that people have found connections to their late 4-year-old son across the nation. Those ties have even transcended international borders.

The toy car that Carson was holding when a 100-year-old gravestone fell on him, ending his brief life in 2012, has sparked a pay-it-forward movement to remember the boy’s courage.
Where some families might see the tiny 1970 Chevrolet Camaro as a bitter reminder of their loss, the Cheneys keep it as a warm memento. It comforts them.
“They delivered it to me an hour later and I carried that car around with me for weeks,” Hilary Cheney said. “I even slept with it under my pillow. Knowing it was the last thing Carson had played with makes it one of my most valued treasures.”
That blue-and-white-striped Hot Wheels car sits in a glass case in their family room, she said.
On the first anniversary of their son’s passing, Hilary Cheney thought of a way to keep Carson’s spirit with them while spreading joy to others.
They began hiding toy cars, still in their packages, around their hometown of Lehi, Utah, with a card that honors Carson’s memory.
“Finders keepers,” the card says. “Please enjoy this gift in honor of Carson Cheney, July 31, 2007-July 5, 2012.”
It also points the lucky finders to the Carson Courage Cars Facebook page, where they can post about their discovery. 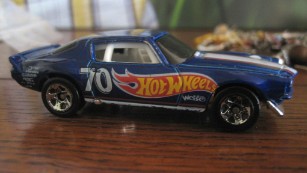 This is the blue-and-white Camaro that started it all.
The idea began as a way for the Cheneys and their friends to celebrate Carson’s life, his mother said, but since the first car was found, their story has exploded. People who find the cars have been inspired to hide some of their own, and so the message has rippled outward, touching the lives of many.
Carson Courage Cars have popped up not only across the states, but they’ve also zoomed their way to international hiding places.
Facebook posters have found cars in Japan, Germany, Sweden, Italy and beyond. The family received a donation of 72 Hot Wheels and have heard from toy car collectors, they said. An enthusiastic store owner in Wisconsin reported to the Cheneys that he hides 100 cars every Sunday.